After centuries of relatively calm and steady seas, digitalization is fueling a powerful tsunami that can shatter the bank’s business model.

Nine months ago I bumped into two men in blue suits at a local tech conference in my local town of Stavanger, Norway. I was casually mingling with my friend Elisabeth and learned that these were two former colleagues of her’s, from her time working as a banker (we still say that don’t we – if you work in a bank, you’re a banker). I quickly discovered the two men were in a predicament – their CEO had just announced to the world the bank was going to launch a startup incubator program and – trickling down the corporate chain of command – these were the two guys who got the job to execute.

For me it was the perfect case – I was a corporate dropout, and had just resurfaced after spending time in Silicon Valley and the east coast of Australia working amidst startups, incubators, accelerators and some of the world’s most innovative companies. I needed a project. The bank needed, well – someone who was 1) not a banker, 2) someone who understood the dynamics of a startup culture, and 3) someone who could help bridge the two worlds and tie it back to their corporate strategy. A true “Mission: Impossible” in other words. I loved it, and we quickly formed an alliance. After 2 months of consulting for companies in Australia, I flew back to Norway, rolled up my sleeves and got to work. What happened next, surprised everyone – myself included.

The first cohort of Grunderhuset SR-Bank along with the mayor of Stavanger, Christine Sagen Helgø.

But let’s roll back a bit and consider a more holistic perspective – why do corporates spend time building incubators and accelerator programs? Straight off the bat it seems like a terrible idea – banks are formal, slow, structured, and risk-averse – flip that around, and you get the characteristics of a typical startup company: playful, super fast, experimental, and risk willingly. Their culture couldn’t possibly be further apart. So why then, would you want to mix the two?

The truth is, banks are running out of time – for centuries they’ve been sheltered from the bracing winds of creative destruction due to an arsenal of competitive barriers: access to capital, historic exclusivity, customer inertia and insights. They all guarded the status quo. But thanks to the ongoing digital revolution, the competitive landscape is shifting as Startups are moving the quarrel downstream: Experience, innovation, platforms, and networks. Realizing they will never be able to compete with this new era of unrelenting change, banks are turning to the oldest trick in the book: if you can’t beat them, join them.

Back in Norway I quickly got introduced to the program participants, and together with the bank we modeled the incubator after international programs and collaborated with other incubators such as Spark Bureau – a small coworking space in rural Australia. We pulled together a 4-month program designed to help entrepreneurs transition from an immature, early-stage idea – to a concrete and viable business model. The program itself was a mix of masterclasses, workshops, and networking events – we’d cover wide and specific topics such as design thinking, customer development, rapid prototyping, agile development, financial planning, legal, sales, growth hacking, and marketing – all designed to accelerate the speed in which entrepreneurs absorb and utilize new knowledge and tools that will help them succeed, faster. The program was run by a facilitator (in this case me). Liaising closely with the bank, my job is to maximize the value-creation potential between the bank, the entrepreneurs, and the startup community at large.

We also introduced practices that were, well – unconventional. We would do weekly check-in’s, and start the whole thing off with energizers. I first saw this working as an industry leader for one of the most forward-thinking digital universities in the world – Hyper Island. We would stand in a circle and verbally attack each other using awkward Japanese slang and body language (actually, nobody knew what the words meant). The whole idea was to introduce rituals and routines that would get people quickly into a state of “us” – then start sharing. Check-ins are all about mentally checking in, and sharing your current state of mind before a meeting starts. Afterward, we would take turns and share 1) what have I done since last week, 2) what am I doing this week, and 3) what do I need – a practice borrowed from Agile standup meetings which do a great job of holding people collectively accountable. 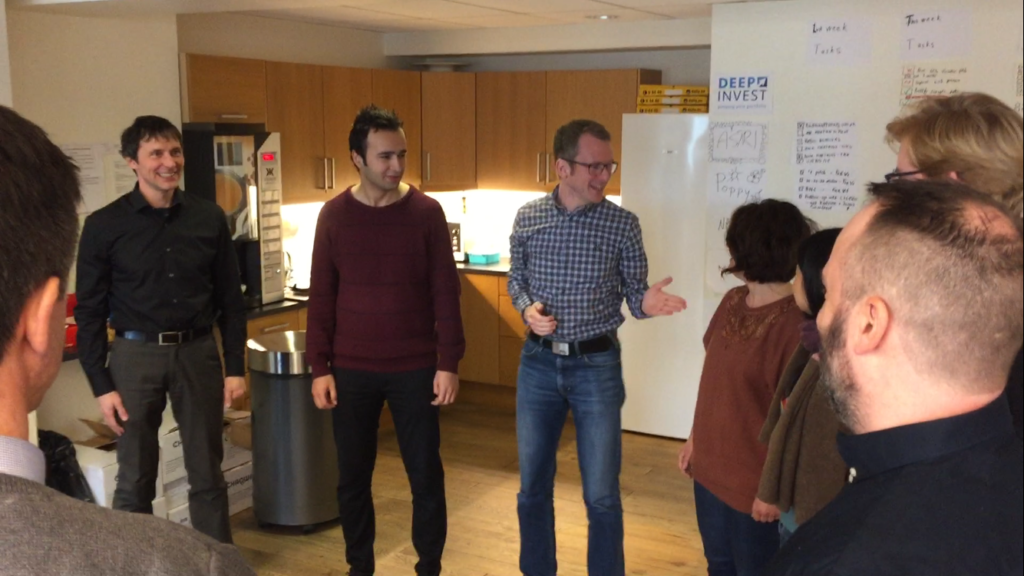 So guess what? It worked. The group of 10 startup companies started to spill their guts on problems, frustrations, and pains they had with their business models and pretty quickly they started to share resources to genuinely help each other. That’s when it hit me; we could pour all the mentors, classes and structure we could afford into this program, yet – the biggest takeaway for the participants was this simple sensation of “we’re in this together”. Entrepreneurship is a lonely and difficult career choice and having people around you who’s sacrificing the same as you, makes all the difference in the world. Soon, teams were making headway – customer insights were flowing in, traction was building, capital investments and public grants were approved. In only 4 months we’d raised over 3.2 MNOK is early investment funds and governmental grants backed by Innovation Norway. In fact, the teams were gaining so much momentum, even the bank people started showing up for weekly check-ins. By the end of the program, we had 10 solid teams ready for the final test – the demo day. What is the demo day? Well, we’ll save that and more for the next blogpost, along with some insight on the most effective practice we ever introduced; the 1-minute pitch.